On Monday, August 22nd, I was at work. It was a seemingly normal day. That night before as I lay in bed, Charlotte seemed still, too still. That word, still, now holds a meaning it never had before and desperately wish it didn’t. She had always been such a chill baby. Sometimes, I would poke her to illicit a reaction for my own reassurance.

Charlotte eventually would poke me back, especially at nighttime. But on Sunday, the 21st, she didn’t. This worried me but I thought, “They said you may not always feel the baby move as much in the third trimester and that’s normal.” So, that next morning, I got up at 5:30 am, drove to work, bought my tea, then of course spilled my tea, took some triage calls and still had not felt her. Still. Still. Still. Honestly, I had a sense of lifelessness, hollowness… this sinking feeling. Thus, without telling my co-workers or my husband, I walked up to the Labor and Delivery unit at 11:10 am (the Labor and Delivery unit is connected to the clinic where I work and is a short walk away). It wasn’t that I wanted to hide my concern; it was that I didn’t want to overreact as I had done before in the pregnancy. When I arrived, I greeted the secretary, signed some paperwork and explained that I’d like to be evaluated for decreased fetal movement.

The day before, our friend, Anna, was staying with us in Richmond before flying back to Boston. She, like my parents and other dear friends, were in town for Charlotte’s baby shower hosted by my dear friend, Abby. Anna, a NICU nurse, was asking me all about the baby as we hung out in her nursery that Sunday night. We were putting away her clothes in the exquisite changing table dresser Peter had crafted, organizing the hospital bag, sitting on our new rocking chair from my parents and simply rejoicing together over the soon-to-be new inhabitant of that room. I had told Anna that the baby had been more quiet that day and she kindly told me that decreased fetal movement does happen and to keep an extra eye on it. I’m so appreciative she said this to me looking back. I tucked away her gentle and informative words.

While sitting in the unit’s lobby, my mind was racing as I saw sweet family members flood in and out with wide smiles, going to visit their newly born family member(s). I thought, “Yes, this will all be okay and my mom and dad will be walking through these doors in less than a month to meet their granddaughter for the first time. Yes, yes, this will all be okay.” But deep down, I wondered if this would not be our story. I tried to push those thoughts down, down… we would wait and see. I waited for what seemed like a while, which in reality, was likely less than 10 minutes, and then a lovely nurse, Lydia, took me back to a triage room. I explained to her that I hadn’t felt my little girl for about a day, and she started asking me those predictable questions: my name, date of birth, family medical history, any other symptoms, all while looking at her computer screen. Then, she turned her gaze from the computer prompting her with those questions and fixed her eyes on me, and saw my fear and said something like, “Okay, we can ask these questions later. Why don’t we get the monitor on you and listen for your baby’s heartbeat.” I felt relief by this and she got me all situated. Still, I was hopeful. The monitor kept picking up my heartbeat but I could tell Lydia was having trouble detecting the baby’s. She repositioned me as well as the monitors and explained that it is sometimes more challenging to detect a fetal heart beat if the baby is breach, which Charlotte was. And I knew she was breach from our last ultrasound, which was exactly one week earlier at 11:20 am that previous Monday. That ultrasound had showed sweet Charlotte Raye was breach but active, sucking on her hands and feet, easily startled and so unbelievably adorable with big feet and chunky cheeks. She had my nose, Peter’s profile and was wholly perfect. The ultrasound doctor said she had an enlarged gall bladder but no follow up was needed now, but she would need this to be evaluated after birth by her pediatrician. There was no follow up ultrasound needed (I asked), she was perfect and the next time I’d see her, would be at her delivery. Looking back, that ultrasound was such a blessing from my faithful Jesus. 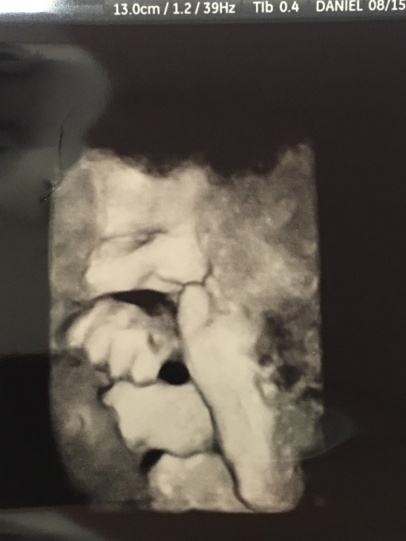 Still, Lydia struggled to find a fetal heartbeat and then looked at me calmly and said, “I’m going to call in a doctor to get an ultrasound.” My heart started sinking but was not yet at rock bottom. The young looking doctor came in with the ultrasound and started probing for life. The waiting was close to unbearable. Abruptly, the door opened and another doctor who looked important, interrupted and said, “I’m sorry but I need to steal away doctor so and so [the young looking one, who was currently looking for Charlotte’s heartbeat].” More waiting. This really upset me (the important looking doctor later apologized to me for interrupting, which was so kind. I truly appreciated that).

But I took some deep breaths, waiting, again likely only a minute and then the young doctor and the important looking doctor both came in. I could tell the important doctor had been given some sort of update that he needed to come in and look at Charlotte. Now, both doctors were intently investigating the ultrasound, searching and searching. My heart was now sitting rock bottom. The silence was deafening. It was like the doctors wanted to say something but also wanted the picture on the ultrasound to suddenly liven up. I could sense their apprehension.

Finally, I broke through the excruciating silence and said to the two doctors point blank, “Is there a heartbeat? I just need to know if there is a heartbeat or not.” The young doctor looked scared and directed her stare to the important looking doctor who then turned his focus from the lifeless ultrasound to my teary eyes and said, “I’m sorry but there is not.” I immediately sat up, becoming hysterical and said, “I need to call my husband.” Unbelief, horror and panic were rising up in me. My thoughts raced: What do you mean there is no heartbeat? I just saw all four chambers of the heart working in unison 7 days ago, just 7 days ago! What in the world do you mean she has died?

I called my husband once, no answer. He was at work that Monday, like any other day, likely in a meeting when I called. I knew if I called him again, he’d answer thinking that I had gone into labor. I called him again and this time, he answered right away. With a concerned voice, he greeted me. All I was able to mutter was, “She’s gone, our baby is gone.” I hated that I was telling him this on the phone but I was beyond grateful that he had not been in the room when I found out that our baby girl’s earthly life was no more. I praised God that Peter had been spared from that horrifying moment. I was thankful I was the only one who had to bear that. The worst part of all of this has been witnessing my husband’s sorrow, seeing him weep … how I wish I could take his pain away and make it all better…

Peter, like me, was in complete shock on the phone. “What do you mean? What do you mean?” he kept saying. He raced to the hospital and stayed on the phone with me until he arrived to the triage room. We couldn’t stop crying when he arrived. I felt like I couldn’t breathe. Pete had just had Lasik surgery done the week before, and couldn’t always shed tears. Yet, his emotion was overwhelming and deep. Two other doctors later walked in and expressed their condolences and explained that it would be best for me to be induced sooner rather than later. My midwife was also with me, and was so comforting. I could go home and wait up to a week they said, but that would be the absolute longest, due to health risks for me, such as infection. We thought about it but why would we do that? How could we manage going home, seeing our home full of baby things, and then force ourselves to drive back to the hospital to deliver our lifeless daughter? Thus, we decided to be induced that very day.

I remember sitting on the edge of the hospital bed in the triage room together, calling each of our family members, and somehow trying to find the words to convey that our little girl had died. Call after call, wave after wave of mourning surfaced. How could this be happening to us? What did we do? Had I failed her? What could I have done differently? I didn’t pray enough, I must not have loved her enough…What if we had just been induced a week earlier? Why? What? … I remember screaming out to God and to my husband, “How can I possibly deliver my dead child? How can I possibly do this?” I was petrified, terrified, confused, baffled beyond belief, angry and felt so jipped. I felt robbed. How could such a cruel thing like this happen?

One thought on “The News That Changed It All”