After Charlotte was delivered, we then started to re-invite our family members into the room to see her and hold her if they felt comfortable. With each wave of family members and friends came new tides of emotion. I felt proud to have each loved one see this baby Peter and I created but I also felt so grieved that we weren’t getting to introduce them to her. Everyone held her so lovingly yet with such a longing for more. I remember Peter standing over her as she lay in the bassinet they prepared for her and him saying, “I’m broken. I’m just so broken.” That snapshot in my head is forever etched in my mind. I hurt so much for my husband. The aching in body was so deep…and still is. 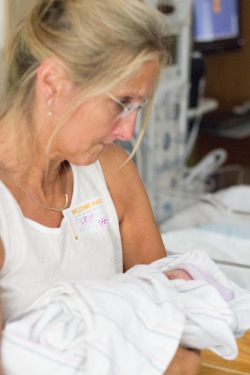 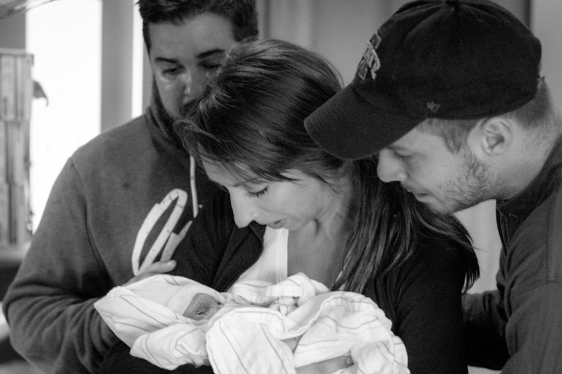 Danny, Holly, Josh & Charlotte
My brother, Mike and sister-in-law, Morgan, were able to come down at the drop of a hat from Pittsburgh that day, which meant the world to me. They were able to see sweet baby Charlotte, their first niece. It was so much driving for such a short time and turn-around. My brother hugged me like never before. Words weren’t needed. Time seemed to stop. His love for me was beyond evident as well as his heartbreak.

Time ticked along and I was soon up and walking. I felt so light, so little and also so empty. My body wasn’t use to not carrying my sweet baby girl. I hated not being pregnant with her. I never wanted to be pregnant so badly. That day after was a bit of a blur. The details of the day before when receiving the shocking news and of the delivery were all so vivid to me down to the color of the bow tie one of the important looking doctor (hunter green). However, I certainly do remember my husband being sick, very sick, that day. Given that he had barely eaten anything and that he hadn’t slept for 24 hours, not to mention the obvious, he started throwing up and didn’t stop for a long while. I felt so badly for him.

Our nurse, Stephania, gathered mementos for us of Charlotte. She told us if we had any desire to have a remembrance, to go for it so that later, we would have it because we could never go back and change our minds. So, we got a clipping of her beautiful brown hair, hand prints, her footprint in clay that Stephania laid in a beautiful shell, pictures, her hat, blankets… Our nurse really went out of her way to gather every little, sweet piece and it was comforting to have something to hold when we would later walk out of the hospital and drive home empty handed otherwise. 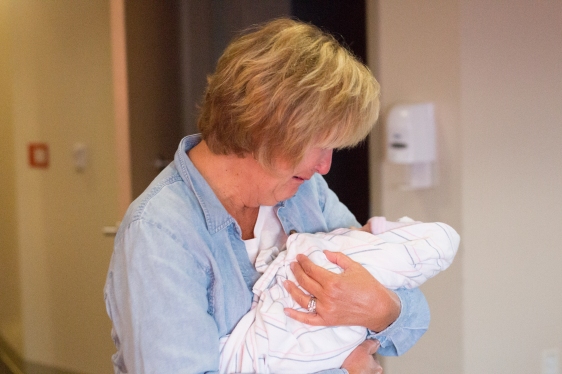 Josh holding Charlotte
The same daytime doctor came back and greeted us. She told us that she heard how well Charlotte’s delivery went and she seemed amazed. God had been so good to us. I had no tearing, no excess bleeding, no infection, and minimal pain. And because of the lacking of complications, this doctor told us we could go home as soon as we were ready; we did not need to stay for 24 hours of observation. I was so thankful. When we first entered the hospital for Charlotte’s induction, I couldn’t bear the thought of going home. The thought of seeing the toys and clothes purchased for her broke my heart. But after the day and a half or so at the hospital, I was so ready to get out of there. The confines of the hospital now felt like a prison to me, some sort of torture chamber. Again, I don’t know why I felt like this but I just did.

Before we could be discharged, we did have to meet with some hospital staff to discuss how to proceed with Charlotte’s remains. Did we want to have her buried or cremated? Did we want to have a formal funeral? Do we do an obituary for her? Do we do an autopsy? Pete and I couldn’t handle the thought of making most of these decisions yet while still in the hospital. They told us that was totally fine but did need to make some decisions within 48 hours for the funeral home we decided on. The social worker gave us a bunch of resources and we combined those papers with the hand full of other documents we had received. This included information on support groups for parents who lost children, our discharge summary, local funeral homes and crematoriums, prescriptions, what to expect when we get home and the list went on and on…

Pete and I really wanted to say goodbye to our baby girl by ourselves. But before doing so, we asked that our family and our friends who had been with us, Abby and Steve, circle around Charlotte and pray. It was like a dedication, a surrendering of our child we never met. So when the time was right, Peter held our baby girl and we all gathered in a tight knit circle and prayed. Who knows what we said exactly, but the sentiment was full of joy and mourning -what good friends those two emotions are. We proclaimed our trust in God in the midst of our pain and we thanked Him for the gift of Charlotte Raye. I’ll never forget it. 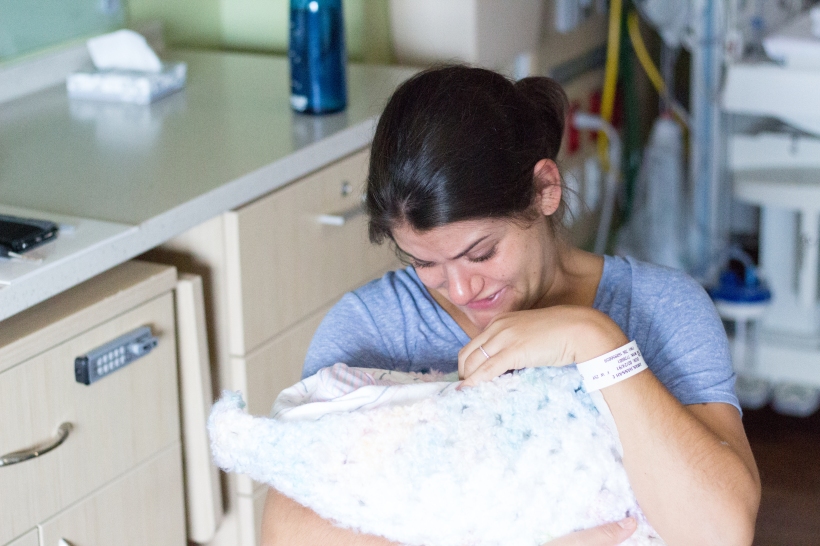 Our family and friends then trickled out of the hospital. I recall my brother, Mike, walking slowly out of the hospital room and pausing by Charlotte in her bassinet. He then gently placed his hand over her little, lifeless body and let it linger there for a few seconds. It was like his sweet way of saying, “See you later, Charlotte. I love you.” I cherish that snapshot.

Then, it was just me, Pete and Charlotte in the room. We held her a lot and cried and prayed. We took pictures of each other holding her. How I will hang onto those photos. We spent a lot of time with our girl as the hospital staff got everything situated for our discharge. When we both reached the ambiguous point of being “ready” to say goodbye to her, we let Stephania know that she could take Charlotte out of the room. Pete and I held Charlotte and kissed her and said our goodbyes. We both agreed we felt as ready as we could. I went into the bathroom and when I came out, she and her basinet were gone. I remember feeling like the wind was knocked out of me and I fell over onto my knees. It was like I couldn’t breath. I just wanted to die. I don’t mean that in a scary, suicidal way at all. I just wanted it to all go away. I wanted to hold my child! I wanted to hold my living baby. I looked at my husband, who was weeping, and he said that they came to take her away. The void in the room was unbearable; it was so empty. I had to get out of that hospital.

A bit later, our daytime doctor came in to officially discharge us and said something to us I remember so clearly. She said, “I always give this same spiel to each family I care for going through what you’re going through. First, you did nothing wrong. You are not to blame for the death of Charlotte. Don’t put that on yourselves; there is nothing you could have done to prevent this. Secondly, you are both parents. Hannah, you are a mother and Peter, you are a father. Even though you are walking out of this hospital empty handed, you are parents to your daughter. Don’t forget that.”

With that, we hugged our nurse and walked out of the hospital hand in hand. I remember as we walked through the main area of the hospital through a sea of people who didn’t know us, who didn’t know about Charlotte, Peter said, “You just never know what the people around you are going through.” Sure, you hear that phrase thrown around but when my husband said it with this new type of conviction, the words rang more true then ever. You really never know what the people around you are carrying with them and how much each one of us needs a kind word.

2 thoughts on “The Acute Aftermath”